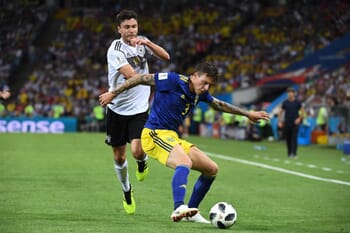 Sweden reached the quarter final stage of the 2018 World Cup and are now bidding to qualify for Euro 2020, with the Scandinavian side currently sitting second behind Spain in Group F.

The two teams clash in Solna on Tuesday night, with La Roja strong favourites and they have won six of their seven qualifying encounters to date, with the 100% record ended by Norway on Saturday thanks to a late Josh King penalty which cancelled out Saul’s opener.

Spain are still six points clear of third-placed Romania with three games remaining, although they’ll want to get qualification tied up quickly and they are averaging over two goals per game in this section.

Indeed, Robert Moreno’s team were facile 3-0 winners against the Swedes in Madrid, with Janne Andersson’s team holding strong until after the hour mark where they conceded two penalties and ended up suffering a heavy defeat.

Sweden will feel more confident of getting a result on home soil and they’re unbeaten in front of their own supporters in qualifying, with the team enjoying a straightforward 4-0 win in Malta on Saturday.

The team have scored in all their qualifying matches aside from that trip to the Bernabeu and there are plenty of options when it comes to the attacking positions, with Mainz’s Robin Quaison probably the best of them all.

The forward has scored four goals in qualifying already, while Spain have scored in all their matches so far and will this time look to put the game to bed after seeing Norway deny them victory a few days ago.

It’s dangerous to back the Spanish to win the game considering they don’t desperately need to get three points and backing BTTS could instead be the way forward.