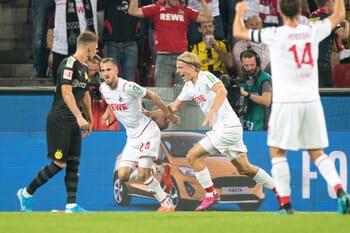 It doesn’t seem a particularly appealing prospect to back Augsburg or Cologne to win this German Bundesliga match, with neither team having impressed since the league restarted after the pandemic.

Augsburg are looking over their shoulder in thirtenth place and certainly need more points to ensure they are safe this season, with the Fuggerstädter having lost their home match against Wolfsburg and more recently they were defeated away at Hertha Berlin.

In between, there was a 3-0 win away to an off-colour Schalke before an insipid goalless draw against Paderborn, with a case of history repeating for Heiko Herrlich’s side considering they finished just above the drop zone last term.

As for Cologne, they are three points better off although the team are yet to enjoy a victory since the restart. There were 2-2 draws against Mainz and Fortuna Dusseldorf before high-scoring games against Hoffenheim and RB Leipzig that ended in a defeat.

There was plenty from those two matches to suggest that Koln will continue to score goals this season, with Colombian forward Jhon Cordoba looking sharp in attack although the player did have to come off early in the last game.

Perhaps Anthony Modeste can deputise in his absence and the Frenchman has chipped in with a couple of goals since the restart, while Augsburg will have been encouraged by the fact that their opponents are conceding a lot of goals at the moment.

Augsburg have managed a total of forty goals this season and we think a visit to the Both Teams to Score market could be a worthwhile exercise, with the “Yes” option trading as favourite for good reason.

The teams played out a rather ill-tempered 1-1 draw earlier this season and it wouldn’t be a surprise to see this clash end all square, although the fact that Koln have only drawn four matches this season puts us off this bet.