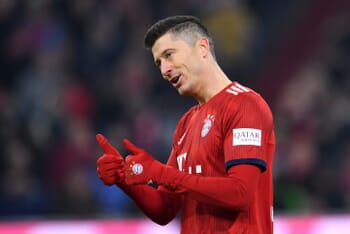 Bayern Munich don’t have long to brush themselves down after Tuesday’s big clash against Borussia Dortmund, with the German champions entertaining Fortuna Dusseldorf on Saturday teatime and it’s a decent fixture for the Bavarian side.

We might expect Hansi Flick to rotate his squad for the arrival of a lesser light to the Allianz Arena, with Bayern looking to get the job done as quickly as possible and keep Dortmund at arm’s length, although they were able to win the reverse fixture by a 4-0 scoreline.

They’ve also been solid enough since the restart, limiting Union Berlin to few chances when winning 2-0 in the German capital before a more entertaining 5-2 victory against a spirited Eintracht Frankfurt team.

Dusseldorf will not expect to get anything from this game although confidence levels were boosted by an unbeaten first couple of matches after the lockdown, with the team drawing with Paderborn before a 2-2 draw away to Cologne.

However, the latter result saw Uwe Rosler’s side go into a 2-0 lead only for Koln to equalise with two late goals and it shows the defensive frailties that have been plaguing this team for much of the campaign.

Fortunen will keep plugging away although there’s a danger of them getting outclassed by the likes of Thomas Muller, Serge Gnabry and Robert Lewandowski. Indeed, the latter will regard this match as a prime opportunity to stretch further clear at the top of the scorer charts.

While Bayern are a short price to win the match, they are much more appealing if you back them to win without conceding, with the home side conceding just under one goal per game.

We shouldn’t expect the visitors to pose too many problems for the Bayern defence and five of their last six victories have come without conceding a goal.

When is Bayern Munich vs Fortuna Dusseldorf being played?

Bayern Munich vs Fortuna Dusseldorf will be played at 17:30 GMT on Saturday 30 May 2020 at Allianz Arena.

What is the Bayern Munich vs Fortuna Dusseldorf H2H record?