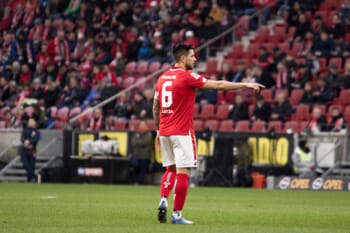 When you first glance at the German Bundesliga coupon, you could be forgiven for thinking that Cologne’s odds are prohibitively short for the weekend encounter against Mainz.

After all, we’re talking about a team who sit tenth in the table and have only won 50% of their clashes at the Mungersdorfer Stadion, while they have lost eight of their thirteen games on the road.

However, closer inspection reveals that it’s been a season of two halves for Koln and we’re not just talking about the lockdown either. Markus Gisdol came in to replace Achim Beierlorzer in November and the team haven’t looked back since.

Since Gisdol took charge, Cologne have slowly risen up the domestic table and they have eight victories from their previous eleven games. While no team will have wanted the lockdown to have arrived, it will have been a blow for a side who were in such excellent form.

Aside from a 4-1 reverse against Bayern Munich, Cologne have won their past five home matches and we fancy their chances of repeating this act when they clash with a Mainz side who are teetering on the edge of the relegation zone.

The visitors have a four point cushion over Fortuna Dusseldorf who sit in sixteenth place, although they have lost 66.6% of away games after experiencing defeat eight teams in a dozen road trips.

Most worryingly of all is the fact that 32 goals have been shipped on the road and there were just two victories in the previous nine matches before the lockdown kicked into gear.

We think Cologne are therefore a decent bet at a shade of odds-on. While some punters believe in momentum that might have disappeared considering that there’s been a two-month break from football, the quality under the manager is still in evidence.

Gisdol will want his team to continue improving and they are capable of a positive result irrespective of the fact that there won’t be any Cologne fans in the stadium for the time being.

When is FC Cologne vs Mainz 05 being played?

What is the FC Cologne vs Mainz 05 H2H record?

What is FC Cologne’s most recent form?

What is Mainz 05’s most recent form?

What is the predicted FC Cologne line-up?

What is the predicted Mainz 05 line-up?