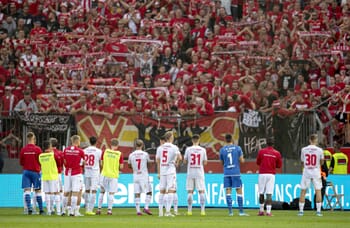 After two months on the sidelines, the German Bundesliga looks set to be the first major domestic football league in Europe to return following the devastating COVID-19 pandemic.

It appears as though Germany are through the worst of the outbreak and have started to relax lockdown measures, with the German FA given the green light by the government to procede with the first matches since the beginning of March.

On Friday 15 May, we look set to enjoy the first match in the form of Fortuna Dusseldorf v SC Paderborn, with these two teams having spent the majority of the season battling against relegation and the odds continue to look stacked against them.

Fortuna are sixteenth in the Bundesliga table and they are four points from safety, with Mainz, Augsburg and Hertha BSC sitting just above them although they will need to improve their win rate in order to stave off the drop.

Uwe Rosler will hope to land a maximum haul in this game, with the former Brentford manager looking to prepare his team in the best possible way considering that training has only recently resumed.

It will be a strange atmosphere at the Merkur Spiel-Arena considering that the game will be played behind closed doors and Bundesliga teams will have to adjust to there being no crowd noise, with home advantage potentially reduced as a result.

It is also clear that the players will be rusty after having not played competitive matches for the past eight weeks. We are likely to see fitness levels drop and there’s the prospect of unconditioned players cramping up in the second half.

Paderborn will want to give a good account of themselves and they are averaging more than one goal per game in the Bundesliga this season, although they have also conceded a massive 54 goals.

Dusseldorf also concede an average of two goals per game and that means it’s easy enough to expect there to be goals in this clash, with both sides needing to go for a win in order to boost their survival hopes.

Paderborn almost look like a lost cause and they are ten points off the pace and desperately need victories to get back towards safety, although it’s hard to see a way back for Steffen Baumgart’s team who have lost seventeen of their twenty-five matches.

Perhaps the post-lockdown situation will have allowed them to make a clean break from the poor form in which they found themselves over the previous few months, with the team capable of scoring goals.

We’ll go for the Over 2.5 Goals option and expect the net to bulge at least three times. Many bookmakers including bet365 are likely to have free live streaming available and that just means that customers with a funded account are able to visit the site and access high definition live streams and audio commentary when it comes to the latest matches.

When is Fortuna Dusseldorf vs Paderborn being played?

Fortuna Dusseldorf vs Paderborn will be played at 14:30 GMT on Saturday 16 May 2020 at MERKUR SPIEL-ARENA.