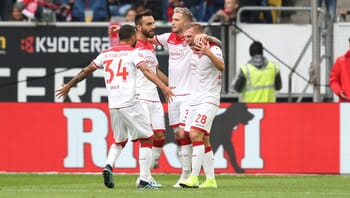 Fortuna Dusseldorf approached their recent clash at Bayern Munich in a rather half-hearted manner, resting key players and essentially throwing in the towel before the game had even started. It was little surprise when the German champions ran riot and won 5-0.

However, we should expect a different approach from Uwe Rosler’s team on Saturday, with Fortunen hosting Hoffenheim at the Merkur-Spiel Arena, with a win potentially lifting the team out of the Bundesliga relegation zone.

There have been some encouraging signs for the home team in recent weeks including a 2-1 win over troubled Schalke, while they showed plenty of character to land a 2-2 draw away to Koln in their bid to land enough points to stay in the top flight.

Kenan Karaman has looked particularly sharp since the restart and now has five goals in his past seven encounters, while top scorer Rouwen Hennings is also having a strong campaign and he got back on the goal trail against Schalke.

Hoffenheim have had a mixed bag of recent results and looked underprepared when getting turned over by a 3-0 scoreline at home to Hertha Berlin, although they have more recently beaten Koln at home before landing a slender victory away at Mainz.

1899 now have a very real chance of securing a Europa League spot for next season’s competition and they have got something from eleven of their fourteen encounters, although six wins have been flanked by five draws.

We think the home team will roll their sleeves up for this clash and potentially scrap out a draw against a team who are by no means bankers for these sort of games.

Indeed, Fortuna Dusseldorf and Hoffenheim played out a 1-1 draw earlier this season at the PreZero Arena and we think that could be a similar outcome for this clash.

When is Fortuna Dusseldorf vs Hoffenheim being played?

Fortuna Dusseldorf vs Hoffenheim will be played at 14:30 GMT on Saturday 6 June 2020 at MERKUR SPIEL-ARENA.

What is the Fortuna Dusseldorf vs Hoffenheim H2H record?