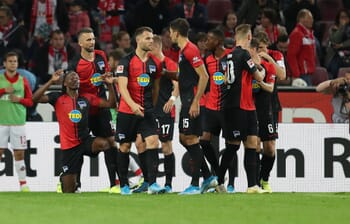 There are two ways to look at Hertha Berlin ahead of their Bundesliga derby clash against Union Berlin. On the one hand, the Old Lady have struggled badly at Olympiastadion this season, winning just three of their thirteen matches in front of their own supporters.

There won’t be any fans attending this clash and we should probably pay attention to the fact that Bruno Labbadia’s side claimed an impressive 3-0 victory at Hoffenheim on Saturday, with this being the first game since the German lockdown.

Three goals in the space of sixteen minutes during the second half helped them claim a big win and they will now look to claim another three points and push towards the top half of the table. There’s reason to think they can overcome Union Berlin.

The visitors started post-lockdown football with a 2-0 home defeat against Bayern Munich and that result was hardly a surprise against the strongest team in Germany.

Manager Urs Fischer will draw confidence from the fact that they limited Bayern to just three shots on target and managed two of their own, while the visiting team have a couple of strikers who have fared well in the German top flight this season.

Sebastian Andersson was only a substitute last weekend although he has scored thirteen goals this term and could line up for this one, while Marius Bulter will also press for inclusion after scoring four goals in 2020 to date.

However, Union are now on a three-match losing run and one can’t escape the fact that they’ll meet a Hertha side with their tails up, while the home team won’t feel the weight of expectation considering all supporters will be absent. For that reason, we’re backing the home side.

When is Hertha Berlin vs Union Berlin being played?

Hertha Berlin vs Union Berlin will be played at 19:30 GMT on Friday 22 May 2020 at Olympiastadion (Berlin).

What is Union Berlin’s most recent form?

What is the predicted Union Berlin line-up?