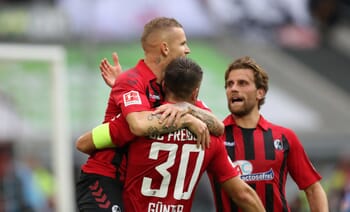 Borussia Monchengladbach have their sights set on a Champions League qualifying spot after a fairly positive restart to their 2019/20 Bundesliga season, with Die Fohlen having narrowly missed out on the premier European competition last term.

Marco Rose’s team sit third in the table and look set to scrap it out with RB Leipzig and Bayer Leverkusen when it comes to that precious top four spot, although we think they’re a decent bet to land another three points on the road on Friday night.

The visitors have won 50% of their fourteen away matches this season and we should also bear in mind that home advantage is probably reduced considering every Bundesliga clash is being played behind closed doors.

Monchengladbach restarted with a 3-1 win at Eintracht Frankfurt before losing 4-1 against Bayer Leverkusen, with a 0-0 draw at Werder Bremen followed by a 4-1 thrashing of Union Berlin.

Marcus Thuram has hit the ground running and has four goals on the board since the Bundesliga resumed, with the French striker likely to be confident of finding the net against a Freiburg side who haven’t won since the pandemic.

Christian Streich’s side were somewhat fortunate to claim a 1-1 draw at Leipzig before taking just a point from matches against Werder Bremen, Eintracht Frankfurt and Bayer Leverkusen.

Scoring goals has been a problem for Freiburg all season, especially at home where they’ve managed to pilfer sixteen in the space of twelve games, with Freiburg drawing a blank in their past two home encounters.

We’re going to keep things simple here and back the visitors to win the game. They are eighteen points better off in the table, have more quality in each department and they’re capable of outscoring opponents who actually seem more comfortable on the road right now.

Freiburg vs B M'gladbach - Last Matches

Freiburg vs B M'gladbach - Stats

Freiburg vs B M'gladbach FAQ

When is Freiburg vs B M'gladbach being played?

Freiburg vs B M'gladbach will be played at 19:30 GMT on Friday 5 June 2020 at Schwarzwald-Stadion.

What is the Freiburg vs B M'gladbach H2H record?