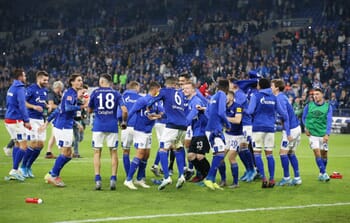 When Schalke 04 beat Borussia Monchengladbach on Friday 17 January, nobody could have forecast that this would be their last victory until early June.

Even allowing for the two-month lay-off due to the COVID-19 pandemic, Die Königsblauen have experienced a horrendous run of results which has seen them slip down the table having previously looked like one of the best teams in Germany.

Before the lockdown, David Wagner’s team were scrambling for points and it’s been fairly pitiful since the restart, with Schalke losing the Revierderby against Borussia Dortmund by a 4-0 scoreline and they have landed just one point.

That came in last weekend’s draw at Union Berlin and provided a few crumbs of comfort for a team who are looking for the 2019/20 season to end, with eleven goals conceded in the past five matches and just two scored.

Schalke have very little to play for in this final quartet of matches and home advantage at the Veltins-Arena hardly counts for anything considering that the majority of teams are falling short in their own stadiums.

Bayer Leverkusen sit just outside the top four at the time of writing, with Die Werkself having enjoyed a strong start against Bayern Munich last weekend without star striker Kai Havertz.

Peter Bosz’s team opened the scoring although Leverkusen were easily picked off defensively and a 4-2 defeat followed, with the team having enjoyed ten victories in their fifteen away games this season.

Havertz could well return from injury for this clash, with Leverkusen having enjoyed wins away to Werder Bremen, Monchengladbach and Freiburg since the restart.

We’re going to bank on the possibility that Schalke will have downed their proverbial tools and that the dressing room is in disarray, while motivation levels are relatively low.

Therefore, we will back the visitors on the Asian Handicap betting market and plump for Leverkusen to land a margin of victory that is at least two goals.

When is Schalke 04 vs Bayer Leverkusen being played?

What is the Schalke 04 vs Bayer Leverkusen H2H record?