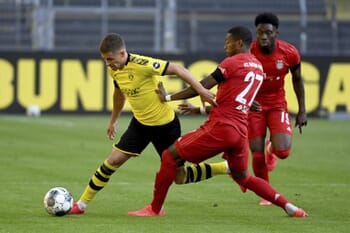 Werder Bremen enjoyed an amazing 5-1 victory at the weekend, with Florian Kohfeldt’s side running riot away to Paderborn which signalled the end of any hope that the latter would survive in the German Bundesliga this season.

The big question is now whether Werder can engineer the Great Escape, although they had hardly been in excellent form before that compelling victory, with Bremen getting turned over at home to Wolfsburg and Eintracht Frankfurt, while they were also beaten 4-1 at home to Bayer Leverkusen immediately after the Bundesliga restarted.

The home side have three games to try and keep their survival hopes afloat, although they still trail fifteenth-placed Mainz by three points with an inferior goal difference, while it seems implausible that they will get anything against the champions.

Bayern Munich have effectively won the Bundesliga title considering that they are seven points clear of Borussia Dortmund with a superior goal difference, with just three matches remaining. Any betting tips for this game have to feature the Bavarian side winning in some shape or form.

Hansi Flick’s side will want to get over the line in style and we think they could completely outclass their lowly opponents in this game, with the champions having won all of their Bundesliga matches since the restart.

Indeed, they have been in the winning habit ever since Flick replaced Niko Kovac and they have scored forty-two goals in their fifteen games on the road. It’s unlikely they are going to show their opponents any mercy.

Our prediction is to back Bayern with a -2 goal handicap at odds close to even money, knowing that it’s money back if they win by exactly two goals, although this is a side who can score freely and they could do to Werder what Werder did to Paderborn last weekend.

The home side can glean no advantage from playing in their own stadium and have clearly felt more confident on the road, with just nine home goals notched all season. The betting odds seem to be reasonably fair about this selection.

When is Werder Bremen vs Bayern Munich being played?

Werder Bremen vs Bayern Munich will be played at 19:30 GMT on Tuesday 16 June 2020 at Weserstadion.

What is the Werder Bremen vs Bayern Munich H2H record?