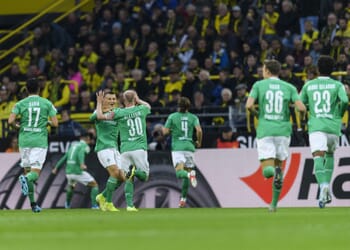 Werder Bremen are giving themselves a fighting chance of remaining in the Bundesliga following a series of spirited performances which have helped them inch towards safety.

Florian Kohfeldt’s team are still in a whole world of trouble. At the time of writing, Die Werderaner are seventeenth in the German top flight and three points adrift of safety although they have racked up seven points from their previous three matches.

After losing 4-1 at home to a classy Bayer Leverkusen side, they scored a valuable win at Freiburg where the team went back to basics and got their defending bang on, while this laid the foundation for a goalless draw against Monchengladbach and a 1-0 victory away to Schalke.

They can now approach this clash against Wolfsburg with confidence and the knowhow to tame different defences along the way, with the visitors having had a mixed bag of results since the restart.

On the road, they have won 2-1 at Augsburg before a fantastic display saw them run riot 4-1 away to Bayer Leverkusen, although they have also stumbled at home to Borussia Dortmund and Eintracht Frankfurt.

Perhaps they will prove too strong for their opponents in this clash but we think Under 2.5 Goals could be the best play for this game considering that Werder Bremen would gladly take a point in their quest for survival.

Expect the home side to take few risks when it comes to committing men forward, with the team’s home form of 1-3-9 the reason why they’re in such trouble at the moment and it’s imperative that they stop losing as many games.

Wolfsburg have managed 24 goals in 14 away matches although they might find themselves running into a brick wall in this clash and it could be a case of waiting patiently for the breakthrough.

When is Werder Bremen vs Wolfsburg being played?

Werder Bremen vs Wolfsburg will be played at 12:30 GMT on Sunday 7 June 2020 at Weserstadion.

What is the Werder Bremen vs Wolfsburg H2H record?