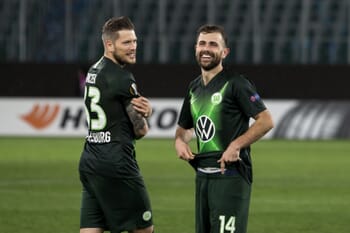 It might seem odd to oppose Borussia Dortmund after Lucien Favre’s side returned to action with a 4-0 Revierderby win over Schalke 04, although the latter really gifted a few goals to their rivals during the first match of the post-lockdown phase.

Dortmund are clearly blessed with talented attacking players, although the likes of Raphael Guerreiro, Thorgan Hazard and Julian Brandt were given the freedom of the Westfalenstadion pitch and perhaps the visiting side to the Volkswagen Arena this weekend won’t find things as straightforward.

It should be noted that Dortmund have won less than 50% of their away matches in the German top flight this season and that is essentially what is likely to cost them the chance of stealing Bayern Munich’s crown.

The Achilles Heel has been defending on the road and twenty-three goals have been shipped in thirteen away encounters, with this in stark contrast to the ten conceded in front of their own supporters.

Wolfsburg opened up their post-lockdown campaign with a 2-1 victory away to Augsburg, with the Wolves now sitting sixth in the Bundesliga table and they have only lost three of their thirteen matches on home soil this season.

Oliver Glasner’s side will be targetting a Europa League spot next season and they have managed to keep things tight at home for the most part this term, conceding an average of one goal per game.

We think the best way to proceed could be backing Wolfsburg on the Asian Handicap with a one-goal start. This bet gives us a bit of insurance by virtue of the fact that if they lose by a single goal, we will get our money back.

However, we would stand to profit from this bet if the Wolves drew or won the match, with this certainly a possibility after a confidence-boosting victory on the road and another week of training together.

Wout Weghorst will also return for Wolfsburg and the striker will be raring to go after missing the opening match of the campaign through suspension.

When is Wolfsburg vs Borussia Dortmund being played?

Wolfsburg vs Borussia Dortmund will be played at 14:30 GMT on Saturday 23 May 2020 at Volkswagen Arena.

What is the Wolfsburg vs Borussia Dortmund H2H record?