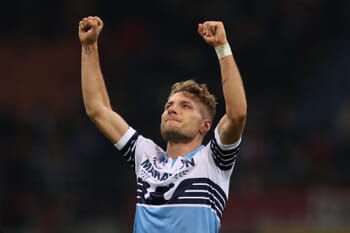 Could Lazio be genuine Serie A title challengers this season? The Rome side have only ever won two Scudetto’s and the latest of these came in 2000, although Simone Inzhagi’s side are having an excellent campaign and there’s reasons for expecting them to win this Monday night clash.

The Eagles have won ten of their fifteen Serie A matches this season which leaves them just three points behind champions Juventus and a further two points off pace-setting Internazionale.

However, it has now been seven straight wins for Lazio and that recent 3-1 victory over Juve has given the team tremendous confidence that they can genuinely challenge for the title this season.

Ciro Immobile has been on fire for his team this season and has reached the 20-goal mark already this season, with the Italian having scored in eight consecutive games until the Juventus match.

Sergej Milinkovic-Savic continues his upward trajectory in Rome, while Joaquin Correa is another goalscoring midfielder who is propelling the team to new heights.

Cagliari are having an excellent time of things themselves and sit fourth in the Serie A table, with the Islanders four points behind their opponents and they have won five of their eight home matches.

Indeed, the two home defeats suffered were against Brescia and Inter earlier in the campaign and Rolando Maran’s side are enjoying a massive unbeaten run which effectively makes them the surprise package in the division this term.

There have been entertaining wins over Fiorentina and Sampdoria recently where Cagliari have won 5-2 and 4-3 respectively, although this is a sterner challenge for a team who finished a lowly 15th in the table last term.

As such, we will plump for a Lazio victory as they look to get in the thick of things at the top of the table.

When is Cagliari vs Lazio being played?

What is the Cagliari vs Lazio H2H record?

What is Cagliari’s most recent form?

What is the predicted Cagliari line-up?