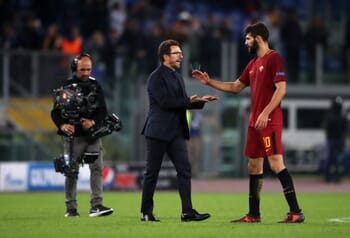 After a successful time of things in charge of Shakhtar Donetsk, Paulo Fonseca took charge of AS Roma for the 2019-20 Serie A season and it was a relatively successful campaign for La Lupa who finished fifth in the overall standings and therefore qualified Roma for the Europa League.

Roma were especially impressive towards the end of last season when winning seven and drawing one of their final eight matches of the campaign, with this excellent run including a 3-1 win at Juventus and we think you should be betting on the home side on the Asian Handicap for this clash.

Roma looked a little rusty when drawing 0-0 away to Verona in their 2020-21 opener, although they had the lion’s share of possession and also carved out the majority of chances, with Pedro, Henrikh Mkhitaryan and Justin Kluivert among the dangerous players in the squad.

We shouldn’t forget that Roma went fairly deep in last season’s Europa league before being beaten by eventual winners Sevilla and we’re not sure that Juventus can be tipped at odds-on considering that Andrea Pirlo has just taken charge of the Italian champions.

The Best Roma vs Juventus Predictions

It might be that Pirlo is a raging success and Dejan Kulusevski appears to have the confidence of the manager, with the Swede partnering Cristiano Ronaldo in attack for Juve’s first match of the campaign against Sampdoria and the youngster broke the deadlock.

Bonucci and Chiellini continue to be stout for the Juventus defence although we’re expecting the champions to have a difficult ordeal in this clash and can’t help but feel this match will be closer than the betting odds suggest.

Juve demonstrated under Maurizio Sarri that they were capable of being undone by well-organised teams, especially in Europe and you can bet on Roma with half a goal advantage at a shade of odds-on for this Serie A blockbuster clash.

When is Roma vs Juventus being played?

What is the Roma vs Juventus H2H record?

Who is injured or suspended for Roma?

Who is injured or suspended for Juventus?