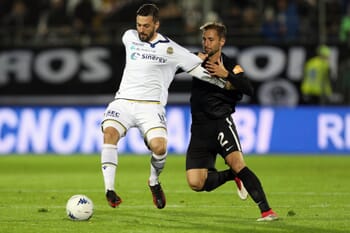 There has been little to separate Verona and Cagliari during the 2019/20 Italian Serie A campaign this season, with the former three points better off after twenty-five games played and they’re marginal favourites to win this clash on 20 June.

Hellas Verona sit eighth in the table and there’s the definite possibility that I Gialloblu could qualify for the Europa League, with Milan marginally ahead of them in seventh place and Napoli are also within touching distance.

Ivan Juric is the popular manager of the home side and the Croatian deserves enormous credit for steering Verona into the top flight after they finished fifth in Serie B last term before getting promoted through the play-offs.

Since 7 December, the home side have lost just one match in Serie A and that came away at Sampdoria in their final match before the lockdown, with this defeat preceded by a series of draws and victories which effectively means they are safe in the top flight this term.

As for Cagliari, Walter Zenga was only in charge of first team matters for a couple of weeks before the lockdown, with the Italian football legend replacing Rolando Maran who could not buy a win after a succession of twelve matches without a victory.

It is impossible to predict how Zenga is going to fare in such difficult circumstances although it’s a tricky task for the former goalkeeper considering he has barely had time to impose his ideas on the training ground.

After eight defeats and three draws in the past eleven matches, surely the ambition will be to steady the ship although we can’t resist the opportunity to back Verona at tasty odds-against quotes.

Verona could catch Cagliari cold and the malaise might be deep-set after that horrendous run which is in stark contrast to the fourteen match unbeaten run that occurred earlier in the season when Maran could do no wrong and a place in Europe seemed a viable option.

When is Verona vs Cagliari being played?

Verona vs Cagliari will be played at 20:45 GMT on Saturday 20 June 2020 at Stadio Marc Antonio Bentegodi.

What is the Verona vs Cagliari H2H record?

What is Verona’s most recent form?

What is Cagliari’s most recent form?

What is the predicted Verona line-up?

What is the predicted Cagliari line-up?