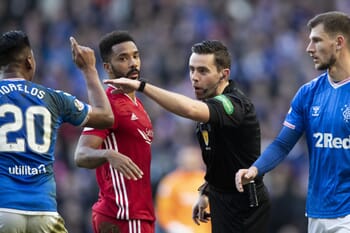 The 2020/21 Scottish Premiership season starts on Saturday 1 August, with Rangers hoping this will finally be the season where they end Celtic’s title dominance.

The latter have now won nine consecutive SPL titles and Steven Gerrard will find it galling if Celtic make it ten on the bounce, with the Gers having been thirteen points behind their Old Firm rivals when the 2019/20 campaign was brought to a premature end.

Rangers start with a difficult opener at Pittodrie and our prediction is that Aberdeen will make life difficult for their Glasgow opponents, with Derek McInnes’ side challenging for third spot when the campaign ended in March.

It’s worth noting that the Dons recovered from a 5-0 thrashing at Ibrox last September to pull off a 2-2 draw against Rangers in December before leaving Ibrox with a goalless draw in February. Indeed, we’re surprised that the visitors are so short in the betting.

After all, this is the first match of a new season and it’s hard to gauge how any team is going to perform based on a handful of friendly encounters. While Rangers were twenty-two points better off in the standings last term, they did fail to win five of their fifteen games on the road.

Therefore, our betting tip is to back Aberdeen with a 1.5 goal start on the Asian Handicap at bet365 . This means that the home side could afford to lose by a single goal and we would still profit with this wager.

The Dons will aim to keep Alfredo Morelos quiet considering that the Colombian scored a sum total of twenty-nine goals for Rangers last term, although it remains to be seen whether his hot-headed ways have been eradicated.

Aberdeen manager Derek McInnes has practically a full squad from which to choose and we think this will be a closer run thing than the latest betting odds suggest.

When is Aberdeen vs Rangers being played?

Aberdeen vs Rangers will be played at 12:30 GMT on Saturday 1 August 2020 at Pittodrie Stadium.

What is the Aberdeen vs Rangers H2H record?

What is Aberdeen’s most recent form?

What is the predicted Aberdeen line-up?