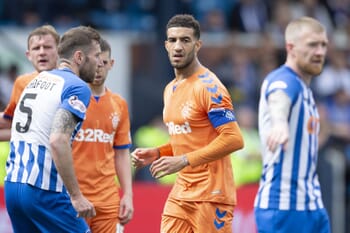 Glasgow Rangers have not been crowned Scottish champions since 2011, with the Old Firm club having plummeted down the divisions and having to haul themselves back up to the Premiership.

However, it feels as though the Gers are finally on an even keel with Celtic and Steven Gerrard’s team are currently matching their arch-rivals stride for stride during the current campaign. There’s real hope that they can finally end the eight-season winning run.

Rangers are enjoying a five-match winning run of their own, with the bookies making them strong favourites to win at New Douglas Park on Sunday, with the visitors coming out 5-0 victors when the teams met at Ibrox earlier this season.

Indeed, the Gers have won their past four matches by at least a two-goal margin and that man Alfredo Morelos is enjoying a goal-filled season which has seen the Colombian rack up 22 goals in all competitions.

The forward has also seemingly improved from a discipline point-of-view, with no red cards and he’s currently enjoying a purple patch which has seen him score six goals in the past four matches.

As for Hamilton, their ambitions are somewhat more modest, with the team sitting in tenth position and they have managed just two wins from their seven home games this season.

Since narrowly beating Livingston on 28 September, the Accies have failed to register a victory at six attempts although they have drawn their past two encounters against Ross County and Kilmarnock.

However, the home side were blown away at Ibrox earlier in the campaign and we expect a similar type of scoreline in this encounter. Backing Rangers on the Asian Handicap with a -2 goal deficit could be the way to go, with a profit realised if the visitors claim a three-goal winning margin.

When is Hamilton vs Rangers being played?

What is the Hamilton vs Rangers H2H record?

What is Hamilton’s most recent form?

What is the predicted Hamilton line-up?

Who is injured or suspended for Hamilton?

Who is injured or suspended for Rangers?