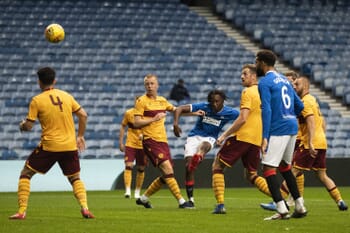 Glasgow Rangers were always going to find life difficult in Germany and so it proved when they narrowly lost 1-0 to Bayer Leverkusen on Thursday, with Steven Gerrard’s side having previously lost 3-1 at Ibrox against the same opponents.

However, the Gers can now focus on domestic affairs and our tip is that Rangers will enjoy a comfortable win over St Mirren on Sunday without conceding a goal against their opponents.

Although Gerrard’s team only managed a 1-0 winning scoreline at Pittodrie in their Scottish Premiership opener, they prevented Aberdeen from registering a shot on target and the manager will want his side to continue their defensive stinginess as they bid to finally topple Celtic in Scotland.

Ryan Kent proved to be the match winner against the Dons and looks to be integral to the Gers’ hopes of landing the title this season, while Joe Aribo continues to develop into a world-class talent and we know all about the predatory instinct of Alfredo Morelos.

Rangers don’t have long to dust themselves down after the clash in Germany but really need to enjoy a fast start, with St Mirren also bidding to continue a 100% record after winning their opening match against Livingston.

It was a slightly fortunate win considering they had less possession and shots on target compared to their opponents, with the Saints having managed just eleven goals in fifteen away matches last term.

We would expect Rangers to dominate the game and deliver a professional performance, with enough strength in depth to cope with the early fixture schedule and the betting angle looks to be the 1.66 about them winning without conceding.

Our prediction is that the Gers might take a while to break down opponents who would love to leave Ibrox with a point, although both games ended in a 1-0 victory to the favourites last term.

When is Rangers vs St Mirren being played?

What is the Rangers vs St Mirren H2H record?

What is St Mirren’s most recent form?

What is the predicted St Mirren line-up?