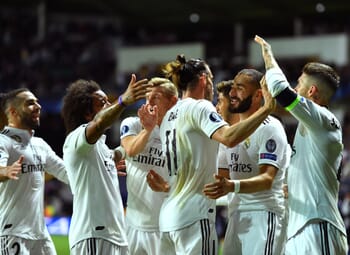 Real Madrid ended up winning the 2019/20 La Liga title relatively easily, with Los Merengues returning after lockdown and embarking on a big winning run that saw Zinedine Zidane’s side leapfrogging Barcelona and becoming champions by a margin of five points.

Real begin their title defence on Sunday 20 September with a trip to the Reale Arena and our tip is that they will make a winning start despite facing a pretty competitive team who managed to qualify for the Europa League this term.

Eden Hazard has a frustrating first campaign at the Bernabeu after a big money arrival from Chelsea, although the Belgian now has the opportunity to blaze a trail and we’re always reassured by the number of goals that Karim Benzema is able to score for this team, with the Frenchman having pilfered twenty-one goals last term.

Sergio Ramos continues to lead the team from centre-half and hit a double figure tally of his own last term, with Real having hit top gear towards the end of the last campaign when registering ten successive wins before drawing their final clash.

David Silva is the notable arrival to the Reale Arena this summer and the former Manchester City midfielder will relish competing against illustrious opponents in this clash, although our prediction is that they will come off worse against a team who have had that extra time to prepare for the new campaign.

Imanol Alguacil did an excellent job in steering Sociedad to a sixth-placed finish last season although the team didn’t end particularly well and they began the campaign with a less-than-convincing draw away to Valladolid which doesn’t suggest they’re in excellent form for this clash.

While Real Madrid might be a little rusty, we are betting on the Spanish champions to secure their first three-point haul of the campaign.

When is Real Sociedad vs Real Madrid being played?

Real Sociedad vs Real Madrid will be played at 20:00 GMT on Sunday 20 September 2020 at Anoeta Stadium.

What is the Real Sociedad vs Real Madrid H2H record?

What is Real Sociedad’s most recent form?

What is the predicted Real Sociedad line-up?

Who is injured or suspended for Real Sociedad?

Who is injured or suspended for Real Madrid?