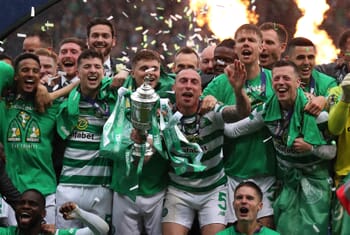 Celtic have been handed a generous Champions League second qualifying round tie after the Scottish champions were paired with Nomme Kalju and they’re overwhelming favourites to take a step closer to the group stage of the competition.

The champions of Estonia visit Celtic Park on Wednesday night, with Roman Kozhukhovskyi's side having won the 2018 Meistriliiga title when spending the entire domestic season going unbeaten with twenty-five wins and eleven draws from thirty-six games played.

There are clearly some enormous mismatches in the Estonian domestic league which led Nomme Kalju to score an incredible 114 goals last term, although they’re not having things their own way this term and currently sit fourth at the midway point of the campaign.

In the previous round of the Champions League, they narrowly overcame Macedonian champions KF Shkëndija despite losing the first leg 1-0 and we might expect them to be outclassed by a Celtic team with serious aspirations of making headway in Europe.

Neil Lennon’s side enjoyed 3-1 and 2-1 wins over Sarajevo in the previous round of the competition and will be confident of establishing an unassailable first leg advantage before flying to Estonia next week.

Odsonne Édouard is potentially a future French international and the young forward is sure to cause plenty of problems for the visitors’ defence, while Callum McGregor produced an eye-catching performance against Sarajevo in the second leg and he’s likely to be ready to shine again.

We’re going to go for Celtic to make a big statement in this game and will get with the Scottish champions on the Asian Handicap market, with Lennon’s side looking a decent shout to win by at least three goals.