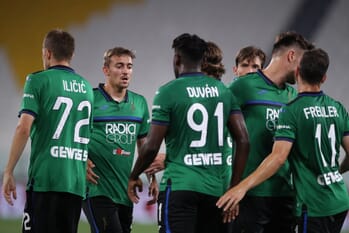 Many regard the Champions League quarter final draw to have a lop-sided look about it, although our prediction is that the clash between Atalanta and Paris Saint-Germain could be the last eight tie of the round.

Atalanta looked down and out during the group stage of the competition before storming back to finish second behind Manchester City and they then defied the betting odds to overcome Valencia in swashbuckling style despite the bookies expecting it to be an even encounter.

Our betting tip is that the Serie A team can give PSG a real test when the teams clash at the Estadio da Luz in Lisbon on 12 August, with Gian Piero Gasperini’s side looking like the best team in Italy following the lockdown and they could cause a stir against the French champions.

Yes, we know that Thomas Tuchel’s side are easily the best side in France and they were also impressive to reach the quarter final phase of the Champions League, although PSG did lose 2-1 away to Borussia Dortmund before landing a 2-0 victory in Paris to ensure they went through on aggregate.

Much is made of the brilliant attacking players in the squad, with Kylian Mbappe, Neymar and Mauro Icardi arguably the most exciting front three if Tuchel decides to pitch them into battle at the same time, although he might temper his tactics considering Atalanta’s crazy goal stats.

The Italian side put eight goals past Valencia over two games and they have scored eighty goals domestically in twenty-eight matches, with Luis Muriel and Duvan Zapata proving to be worth their weight in gold.

Our betting tip is to back Atalanta on the Asian Handicap market where we can split stakes between the Italian side off scratch (money back if they draw) and +0.5 (profit if they draw or win). That seems to be a sensible course of action.

When is Atalanta vs PSG being played?