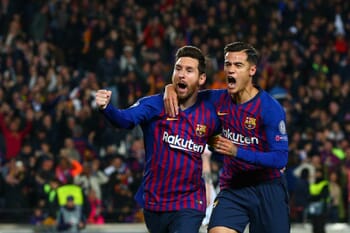 The top two teams in Champions League Group F clash at the Nou Camp on Wednesday, with Barcelona strong favourites to claim a victory which would see Ernesto Valverde’s team into the last sixteen of the competition.

It’s been something of a struggle in Europe for Barca so far, with the Spanish champions drawing in Dortmund before coming from behind to overcome a spirited Internazionale side.

The Catalan side then won away to Slavia Prague although the Czech champions were able to hold them to a goalless draw in the reverse fixture, so there’s a bit of pressure on them coming into this game.

Nevertheless, Barcelona are in decent form after a 4-1 home win over Celta Vigo and a 2-1 away victory in Levante, with Lionel Messi having now scored nine goals in his previous eight games after drawing a blank for his first four matches of the campaign.

Barca fielded Messi, Luis Suarez and Antoine Griezmann in their most recent match and it’s clear that Borussia Dortmund might have a few problems dealing with the calibre of this attack considering that the German side have been leaking goals recently.

While Lucien Favre’s side have a decent chance of qualifying for the last sixteen of the Champions League, they had to come from two goals down to beat Inter in their last European tie and their domestic form has gone off a cliff.

A 4-0 thrashing at the Allianz Arena was pretty humbling for this team and they also had to stage a second half comeback against Paderborn to draw 3-3 after trailing by three goals at the break.

Dortmund know that a defeat at the Nou Camp would leave qualifying out of their hands considering Inter are likely to beat Slavia Prague, so we’re going to opt for a Barcelona win with both teams finding the net in this one.

When is Barcelona vs Borussia Dortmund being played?

Barcelona vs Borussia Dortmund will be played at 20:00 GMT on Wednesday 27 November 2019 at Camp Nou.