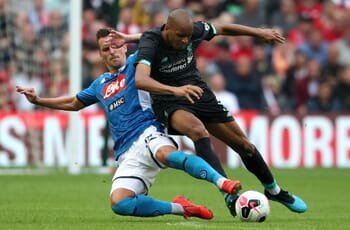 Barcelona are overwhelming favourites to reach the last eight of the Champions League after a 1-1 draw in Naples, although we think this tie is still up for grabs and the Italian side are still capable of going through.

Dries Mertens had given Napoli the lead in the reverse fixture at the San Paolo before Antoine Griezmann’s equaliser, although the Serie A team had twice as many shots on target as their opponents and will be heading to the Nou Camp with nothing to lose.

Gennaro Gattuso’s team sit sixth in their domestic table, although their away form has been better than at home, with the Azzurri having only been defeated three times in thirteen road encounters.

In addition, they claimed a 1-1 draw at Liverpool along with a 3-2 victory away to Red Bull Salzburg, while they have quality within their ranks including the dynamic midfield duo of Dries Mertens and Piotr Zielinski.

There is also the fact that Napoli have won seven of their past nine matches in all competitions, with Barcelona having followed that 1-1 draw in Naples with a 2-0 defeat at the Bernabeu where the Catalan side were picked off by two late goals in the Clasico.

Barca do have superlative home form in La Liga with twelve wins and a draw from thirteen matches played and they’ve also ran in 44 goals at the Nou Camp.

It might therefore seem foolish to oppose them but they actually start with a foot already in the last eight thanks to that away goal in Naples and they therefore don’t need to force the issue against their Italian opponents.

We can get with the visitors enjoying a 1.5 goal advantage knowing that we will still win the bet if Barcelona claim a one-goal margin of victory and their basic remit is to keep their opponents at arm’s length.