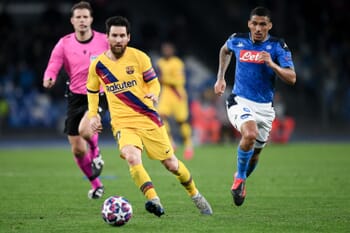 Barcelona are no longer one of the favourites to win the 2019/20 Champions League considering that they have regularly dropped points in La Liga since the restart and now face the prospect of seeing the Spanish title going to rivals Real Madrid.

Quique Setien’s side have drawn three of their matches at the time of writing including a 2-2 draw against Celta Vigo and they will want to make amends by going deep in Europe’s primary cup competition, with Barca having earned a 1-1 draw in Naples in the first leg of their last sixteen clash.

That means that a goalless draw or a victory will be enough for the Catalan side to set up a last eight clash in Portugal against Bayern Munich, with our betting prediction being that Barcelona should win this game with plenty to spare against the sixth-best team in Italy.

Napoli are a decent enough team who have enjoyed some good form domestically since the lockdown, although Gennaro Gattuso’s side know that they need to score in this game but also stop their opponents doing the same and it’s not often that Barca fail to find the net in any match.

Lionel Messi will want to steer his team into a World Cup-style set up the following week, with Barcelona having won sixteen of their eighteen matches at the Nou Camp this season when it comes to domestic matches.

Barca average nearly three goals per home game and the absence of fans at the stadium shouldn’t prevent them from having the upper hand over a Napoli side who are admittedly better on the road than they have been at the Sao Paolo.

Dries Mertens, Hirving Lozano and Lorenzo Insigne could all help the visitors to find the net during the ninety minutes, although Barcelona look the best betting tip on the night.

When is Barcelona vs Napoli being played?