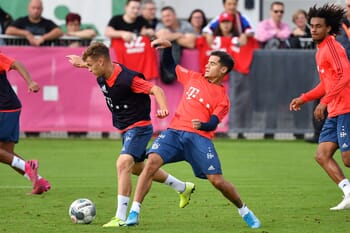 Tottenham Hotspur have started life brightly under Jose Mourinho, with a crushing 5-0 defeat of Burnley on Saturday illustrating that they have firepower in abundance and could yet land a top four finish in the Premier League.

However, the likes of Harry Kane, Son Heung-Min, Lucas Moura and Dele Alli might be nowhere to seen at the Allianz Arena on Wednesday considering there is little point in the visitors having the strongest team possible for this fixture.

Spurs have got a typically hectic fixture schedule over Christmas and that includes Sunday’s trip to Molineux, with Mourinho likely to field a reserve team for what is essentially a Champions League dead rubber.

Incredibly, Bayern Munich actually sit seventh in the Bundesliga table and the German champions are seven points off the pace domestically, although Hans-Dieter Flick will want his team to get back on track after the weekend reverse at Moenchengladbach.

That means it’s been two consecutive defeats for Bayern, with this match representing an opportunity for the team to get back to winning ways and they’ll potentially profit against a youthful English opponent.

Oliver Skipp and Troy Parrott are among those players who could start the game for the visitors after coming off the bench against Burnley, while Christian Eriksen could also earn a rare start and potentially his final one considering the Dane might be eyeing a January move.

We don’t really like the look of Bayern at the prices but are happy to back the home side to be leading at half-time and full-time. Munich can ill-afford the prospect of losing three consecutive matches and their will to win will surely be stronger.

After all, there is something of a winter break in Germany and that means that Bayern can afford to field a stronger team and that could include star striker Robert Lewandowski.

When is Bayern Munich vs Tottenham being played?

Bayern Munich vs Tottenham will be played at 20:00 GMT on Wednesday 11 December 2019 at Allianz Arena.