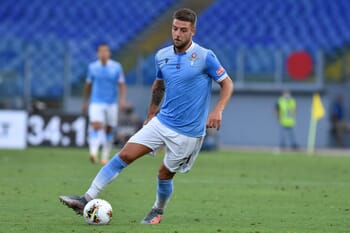 Borussia Dortmund and Lazio are both sitting pretty in Champions League Group F after earning nine and eight points respectively after four games played, with the two teams now meeting at the Westfalenstadion for their penultimate match of the group phase.

It is Lucien Favre’s side who are strong betting favourites, with the Bundesliga outfit bouncing back from a 3-1 defeat at the Stadio Olimpico to record a 2-0 win against Zenit Saint Petersburg before enjoying comfortable wins over Club Brugge.

Borussia Dortmund Look Too Short in the Betting

However, Dortmund don’t need to win this clash against Lazio and simply want to stay ahead of their Italian opponents to make sure they win the section, with Favre potentially rotating his squad for this clash.

It should also be noted that it was the Rome side that claimed a relatively straightforward win in October and our betting tip is to get with Lazio on the Asian Handicap betting market where you can get them with a goal start.

Lazio Can Make Their Point in Champions League Clash

This betting prediction means that Simone Inzhagi’s team only need to avoid defeat in order for our bet to win, although you would also get your money back if they lost by a single goal, with Dortmund having one eye on the German Bundesliga title race right now.

At the time of writing, Lazio are enjoying an eight match unbeaten run in all competitions and the irrepressible Ciro Immobile has scored six goals in his past five games, with the team having found the net in all of their last eight matches.

We’re going to side with the visitors to make a real fist of things, with Erling Haland the danger man for the home side although Lazio managed to outscore Dortmund when they last met.

When is Borussia Dortmund vs Lazio being played?

Borussia Dortmund vs Lazio will be played at 20:00 GMT on Wednesday 2 December 2020 at Signal Iduna Park.