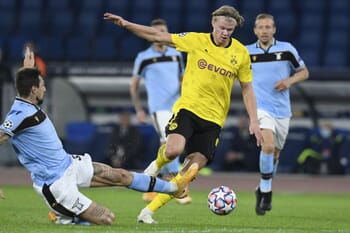 Borussia Dortmund gave Manchester City a fright in the first leg of their Champions League quarter final tie, with Marco Reus scoring an equaliser before Phil Foden fired home before the final whistle to swing the balance back in favour of the English team.

The Bundesliga side will feel especially aggrieved by virtue of the fact that Jude Bellingham had a perfectly legitimate goal ruled out at the Etihad Stadium and it’s our prediction that Dortmund will get on the front foot when it comes to this second leg clash.

Can Dortmund Send Manchester City Out of Champions League?

In theory, Edin Terzić’s side need a 1-0 victory at the Westfalenstadion although there aren’t many sides in England or Europe who have been laying a glove on the Citizens and the job of actually shutting out Pep Guardiola’s side for ninety minutes might be beyond Dortmund.

However, there’s plenty to like about a team that accounted for Sevilla in the previous round of the competition, with Erling Braut Haaland giving Ruben Dias a testing time of things in the first leg, while Reus and Bellingham are also going to pose problems.

Guardiola will feel somewhat uncomfortable about the fact that his team are only a goal to the good at half-time of this tie and the fact that Dortmund have that away goal on the board really means things are in the balance.

It’s clear that the visitors won’t be attempting to defend their slender advantage and going forward is their specialty, with Kevin de Bruyne having enjoyed a magical match in the first leg and the Belgian drove forward with aplomb and got his team on their way.

We’ll keep things simple with our betting tip and bet on both teams to find the net, with a high-scoring clash potentially on the cards although City might continue to keep their noses in front.

When is Borussia Dortmund vs Manchester City being played?

Borussia Dortmund vs Manchester City will be played at 20:00 GMT on Wednesday 14 April 2021 at Signal Iduna Park.