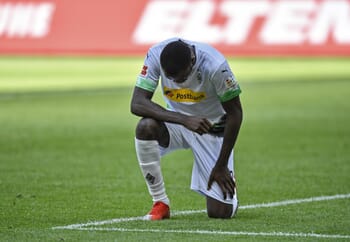 Borussia Monchengladbach are into fairly unchartered territory after reaching the Champions League last sixteen and Marco Rose’s team are dangerous opponents despite their Bundesliga form not quite emulating the 2019/20 season so far.

It was quite an achievement to finish ahead of Internazionale and Shakhtar in the group stage of the competition, with Die Borussen scoring 2-2 draws against Inter and Real Madrid before battering Shakhtar home and away, with two defeats in their final games not proving costly.

The Bundesliga outfit are capable of winning this first leg and our prediction is that they can run Manchester City close, with sixteen goals scored in six group games illustrating that they are not opponents to be taken lightly.

Breel Embolo has come to the fore in recent games to find the net, with the Swiss forward just one of several attacking options within the team and Frenchman Alassane Plea is another player capable of making life difficult for the visitors.

Pep Guardiola has often kept the handbrake on when it comes to Manchester City in these sort of Champions League games and it might again be the case in Germany where the tie will not be won or lost.

While the Citizens will be looking for an away goal, they will be wary of committing too many players forward and there’s a feeling that the English champions of 2018 and 2019 aren’t as potent as previous seasons.

Our betting tip is to get with Monchengladbach on the Asian Handicap, especially as City don’t need to win this game and a high-scoring draw would suit them very well.

We think that the home side have demonstrated enough calibre in Europe to make things difficult and an attacking approach could really call opponents into question considering that City fluffed their lines against Lyon last time.