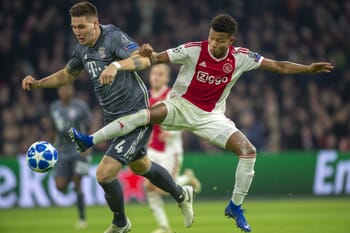 The Blues recovered from losing at home to Valencia by recording consecutive away wins at Lille and Ajax, with Frank Lampard’s team knowing that a victory at Stamford Bridge would shuffle them close to the last sixteen stage.

With Valencia hosting Lille on the same evening, it’s possible that the Spanish team will move on to seven points before entertaining Chelsea, so Lampard will feel as though a victory is imperative to keep the momentum going.

However, this is a difficult fixture against a team who can draw upon last season’s European adventure which saw the Amsterdam side serve as the surprise package in the Champions League.

Erik ten Hag’s side managed to overcome opponents such as Real Madrid and Juventus en route to the semi-final and they really shot themselves in the foot against Tottenham after getting into a commanding position.

Since last season, there have been some key departures although this team has still managed to rack up 3-0 wins over Lille and Valencia, with Ajax respected despite being turned over 1-0 at home to Chelsea a fortnight ago.

We think this could be a similarly cagey affair and a draw would keep both teams in the mix with two games remaining, with the Dutch side likely to feel confident that they can win their final two matches of the campaign.

Therefore, the bet that really appeals is Ajax on the Asian Handicap, with the visitors available at 1.87 with half a goal start. This means that we get the draw on our side as well as the away win.

While Chelsea are attacking and vibrant under their new manager, this is still a new episode for Lampard and several of the young players in the squad, with the visitors likely to make their point.

When is Chelsea vs Ajax being played?

Chelsea vs Ajax will be played at 20:00 GMT on Tuesday 5 November 2019 at Stamford Bridge.

What is Ajax’s most recent form?

What is the predicted Ajax line-up?