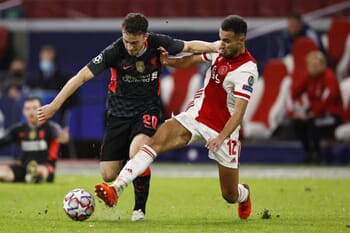 Liverpool fluffed their lines against Atalanta in their most recent Champions League clash although our prediction is that the Reds will get back on track when they meet Ajax at Anfield on Tuesday.

Jurgen Klopp was unrepentant when it came to his team selection against lively Serie A opponents although one suspects that Liverpool will have a stronger Starting 11 on the pitch for the arrival of potentially difficult opponents.

When Ajax and Liverpool clashed at the Johan Cruyff Arena on 21 October, the English champions managed to edge the game by a 1-0 scoreline and our prediction is that the Merseyside team can secure a European Cup victory against their Dutch opponents.

Klopp fielded Rhys Williams and Neco Williams along with Curtis Jones and Divock Origi against Atalanta, with Andy Robertson, Fabinho, Diogo Jota and Roberto Firmino rested, although it wouldn’t be a surprise if the quartet all featured here.

It should also be noted that Mohamed Salah is only getting back up to speed after testing positive for COVID-19 and the Egyptian should be fit and firing in this important clash.

Ajax claimed a 2-2 draw away to Atalanta following their home defeat against Liverpool, while they secured home and away victories against Midtjylland to get themselves back into contention.

The visitors are dangerous opponents and they are flying in the Dutch Eredivisie so we could end up seeing a high-scoring clash although Liverpool are still in the box seat to go through to the last sixteen of the competition.

The Reds had one bad game and that has actually enabled a bigger price and we should reflect on the performance that they managed against Leicester, with Jordan Henderson also likely to be involved this time around.