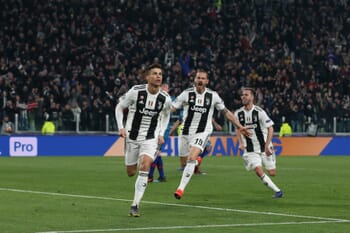 When it comes to the Champions League last sixteen stage, there are lots of favourites for the first leg clashes that we don’t really fancy although Juventus are not one of them.

The Italian champions seem like a completely fair price to overcome Lyon on Wednesday 26 February, especially when you consider that the French side are languishing in the bottom half of Ligue 1 at the time of writing.

Rudi Garcia’s side were one of the teams that the Champions League group winners wanted to be paired with, with Les Gones having finished second to Leipzig in what is regarded as one of the weaker sections.

Lyon only won two of their six group matches and currently sit twelfth in their domestic table, with the team having won just three of their nine matches on home soil.

There was a spirited comeback from 2-0 down against Leipzig in the final group game to land that precious point which took them through to the last sixteen, although they are ultimately short of the quality required to match their Serie A opponents.

The goals have dried up for former Celtic forward Moussa Dembele, while Memphis Depay is the other shining light although the visitors will arrive expecting to claim a first leg victory.

Maurizio Sarri’s side were nearly flawless during the group stage, with Juve taking a 2-0 lead at Atletico Madrid before being pegged back. However, they then embarked on a five-match winning run and the squad is packed with quality.

Cristiano Ronaldo is the obvious poster boy, although the defence continues to be obstinate and concede an average of one goal per game domestically, while Paulo Dybala and Gonzalo Higuain are other dangerous attacking options.

We think that Juventus will ultimately prove too strong and have their noses in front when it comes to playing the second leg clash.

When is Lyon vs Juventus being played?

Lyon vs Juventus will be played at 20:00 GMT on Wednesday 26 February 2020 at Groupama Stadium.

What is Lyon’s most recent form?

What is the predicted Lyon line-up?