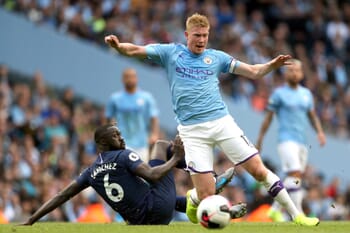 Manchester City are close to securing their first Champions League final spot and the bookies have Pep Guardiola’s team as strong favourites to qualify for the Istanbul showdown after securing a 2-1 win at the Parc des Princes in the semi-final first leg encounter.

Goals from Kevin de Bruyne and Riyad Mahrez swung the tie in favour of the English champions and our prediction is that we’ll see a high-scoring second leg between two attack-minded sides who could trade blows, although it’s ultimately City who hold the upper hand.

There will be a temptation for some punters to back Manchester City to win this second leg encounter at attractive betting odds, although the bottom line is that the Citizens don’t need to win the game having scored two away goals as part of last week’s victory.

That’s not to say Guardiola’s men won’t go on the front foot here, although a draw will be enough to qualify and there could be an element of game management towards the end of the clash if the scoreline is level and City look to defend their advantage.

PSG Have to Attack Man City in Champions League

Paris Saint-Germain are going to have to throw caution to the wind at some stage, with the French champions a goal behind after the first leg and they also conceded those away goals. Mauricio Pochettino knows that his team will need to score twice to stand any chance of going through.

That’s certainly possible with Neymar and Kylian Mbappe in the team and our tip is for both teams to score throughout the ninety minutes, although we expect Manchester City to be lining up in the final and it could be an entertaining match.