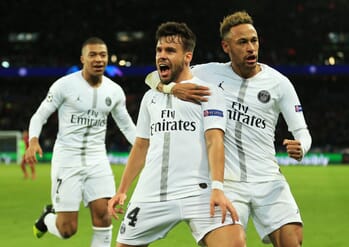 Paris Saint-Germain have been the perennial bridesmaids of the Champions League and Thomas Tuchel’s side could easily drop out of this season’s competition at the last sixteen stage after losing 2-1 at the Westfalenstadion.

The reverse in Dortmund wasn’t exactly a disaster considering that the French champions scored an away goal and created plenty of chances against opponents who are attack-minded but tend to leave gaps at the back.

However, the visitors will arrive at the Parc des Princes knowing that a draw or better will ensure that they progress to the last eight stage and they will benefit from having Erling Braut Haland leading the line for Dortmund.

The Norwegian seemingly has the world at his feet, with the 19-year-old having shone for Red Bull Salzburg during the early part of this season before making the switch to BVB and he’s already notched 36 goals this season.

PSG will be wary of the threat posed by Haland and other team-mates such as Jadon Sancho and Raphael Guerreiro, although this is a team that have conceded 22 goals in 12 away games in the Bundesliga.

Thomas Tuchel will feel confident that his team can eventually get the better of his former club, with Paris having racked up 40 goals in front of their own supporters in Ligue 1 this season and the squad is dripping with attacking riches.

While they led Manchester United after the first leg last season, this time they will be in chase mode and that might suit them better, with Kylian Mbappe and Neymar tasked with the mission of steering the team through to the last eight.

Edinson Cavani has also recently returned to the first team and we feel as though the best bet is backing PSG to win on the night even if they might not go through.

When is PSG vs Borussia Dortmund being played?

PSG vs Borussia Dortmund will be played at 20:00 GMT on Wednesday 11 March 2020 at Parc des Princes.