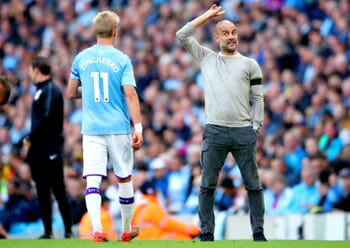 Manchester City have been drawn in the same Champions League qualifying group as Shakhtar Donetsk for the second season running and it was one-way traffic in favour of the English champions last season.

Pep Guardiola’s side won 3-0 at the Metalist Stadium in Kharkiv before trouncing the same opponents by a 6-0 scoreline at the Etihad Stadium and there’s little to suggest things will be any different when the sides meet on Wednesday night in the Ukraine.

Luis Castro’s side have started their domestic season like a house on fire, winning all six matches in the Ukrainian Premier League by an aggregate score of nineteen goals to three.

Forwards Moraes and Marlos have plundered nine goals between them and four of the victories have come on the road, although it comes back to the standard of this domestic league being nowhere near the level of the leading European competitions such as the English counterpart.

Shakhtar failed to win any of their home games in the Champions League group stage last season, drawing with Hoffenheim and Lyon either side of that defeat against Manchester City, with the visitors arriving in good form.

The Citizens are favourites to win this competition and look to be in fantastic shape, with Kevin de Bruyne, Raheem Sterling and Sergio Aguero hitting the ground running and producing some superlative performances.

There is some weakness in defence now that Aymeric Laporte is sidelined, although John Stones, Nicolas Otamendi and Fernandinho are all potential options to operate in the centre, while Rodri is a valuable acquisition in the middle of the park.

We think that Manchester City look worth a bet to cover the Asian Handicap considering that they won this game by a three-goal margin last season. They should therefore be able to claim a victory by at least two goals this time around.

When is Shakhtar Donetsk vs Manchester City being played?

Shakhtar Donetsk vs Manchester City will be played at 20:00 GMT on Wednesday 18 September 2019 at Metalist Oblast Sports Complex.