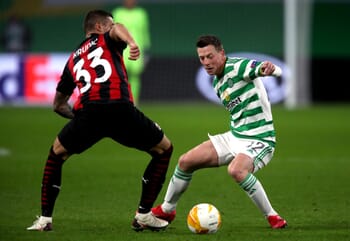 Celtic are having a tough time of things this season, with the Scottish champions streets behind arch rivals Rangers in the Premiership standings and they’re already eliminated from the Europa League with two group games left.

Pressure is mounting on manager Neil Lennon to improve the team’s fortunes although he could do without a Thursday trip to the San Siro to face a Milan side who sit second in Group H after registering two wins and a draw from their four games played.

Stefano Pioli’s team look like one of the strongest outfits in Serie A this season and their 3-0 defeat at home to Lille in this competition is the only defeat of the entire season, with the Rossoneri sitting top of their domestic standings by five points.

While this competition isn’t a huge priority to the Italian outfit, they will want to make further progress and we might expect something similar to the 3-1 victory that was enjoyed at Celtic Park.

Our prediction is that Milan will beat Celtic with something to spare, especially as the visitors have next to little motivation to get anything out of a game which is essentially a dead rubber.

The punters have been rushing to back AC Milan to win this game and they’re trading at pretty short odds which still look good from an accumulator perspective. However, we think there’s little downside to backing them on the Asian Handicap with a -1.5 goal handicap.

That means that a our tip will yield a profit if the home side claim a victory by two goals or more and we think a second string Milan team could have fun against opponents who have won just two of their last ten games in all competitions.

When is AC Milan vs Celtic being played?