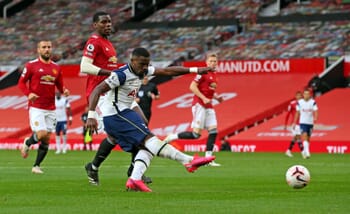 Royal Antwerp might have finished seventeen points off the pace in the Belgian First Division A last season although it appears that Ivan Leko’s team are going to be more successful this season after a bright start to the campaign.

Antwerp Can Find the Net Against Tottenham

It’s been a positive start after landing twenty points from ten domestic matches and there was also a 2-1 win away to Ludogorets Razgrad in the UEFA Europa League last week, with the Belgian league leaders looking to get on the front foot against opponents who are likely to be showing plenty of changes.

Veteran Congolese striker Dieumerci Mbokani has been full of goals recently and might have some joy against opponents who will also look to attack at will, with Gareth Bale among the players who are getting game time in this competition right now.

Spurs opened with a facile 3-0 victory over LASK Linz and Jose Mourinho has basically built a team where there are pretty much two strong players for every position, with Carlos Vinicius and Lucas Moura among the players likely to shine in attacking positions.

Our Best Bet for Europa League Clash Between Antwerp and Spurs

With both sides having opened with a victory in the group stage, there is no real pressure to win this game and Antwerp will feel that they’ll get plenty of points from a double header against LASK irrespective of what happens in this match.

When is Antwerp vs Tottenham being played?

Antwerp vs Tottenham will be played at 17:55 GMT on Thursday 29 October 2020 at Bosuilstadion.

What is Antwerp’s most recent form?

What is the predicted Antwerp line-up?