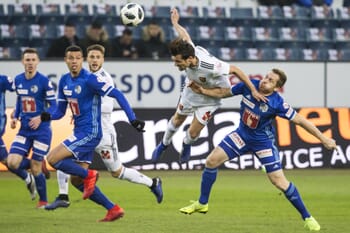 Basel clash with Eintracht Frankfurt on 6 August and will go through to the last eight stage of the Europa League unless something very dramatic happens in this clash.

After all, the Swiss side landed a 3-0 victory in Germany before the lockdown and simply need to keep their opponents at arm’s length to ensure they are going through to a likely quarter final clash against Shakhtar Donetsk.

Basel did not win their domestic league this season, managing only to finish third behind Young Boys and St Gallen, although the Swiss side have been in excellent form recently in front of goal.

There was a surprise 5-0 thrashing of St Gallen before a crazy 4-4 draw against Lugano, with Kemal Ademi filling his boots recently and the striker will be confident of scoring more against an Eintracht Frankfurt side who have to throw caution to the wind.

The visitors are one of the hardest teams to make a predictions when it comes to the German Bundesliga and they finished the season in tenth place, having lost key players a year ago after an impressive season.

Eintracht signed off for the season with a typically entertaining 3-2 victory over Paderborn and Andre Silva having embarked on a scoring spree towards the end of the domestic campaign and the Portuguese could have some joy in this game.

The visitors have to attack from the off and hope to get the early goal. Realistically, going 1-0 down would leave them with the proverbial mountain to climb although our tip is to back Over 2.5 Goals at generous betting odds.

You could be even more generous and look at the Over 3.5 Goals quote along with the “Yes” option on the Both Teams to Score betting market.

When is FC Basel vs Eintracht Frankfurt being played?

FC Basel vs Eintracht Frankfurt will be played at 20:00 GMT on Thursday 6 August 2020 at St. Jakob-Park.

What is FC Basel’s most recent form?

What is the predicted FC Basel line-up?