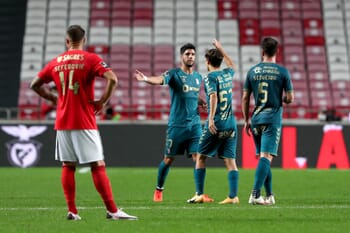 On 5 November 2020, Leicester City put Braga to the sword by a 4-0 scoreline although our prediction is that the Foxes will find things a good deal tougher at the Estadio Municipal when the teams clash in Portugal.

Former Sheffield Wednesday manager Carlos Carvalhal is in charge at the Portuguese club and will be confident that his side can give a better account of themselves, with Braga actually enjoying a strong season domestically.

Bet on Braga to Put Up a Fight Against Leicester

Braga have won seven of their past eight matches and their final game before the international break saw the Braguistas claim a 3-2 victory away to Benfica which really announced their Portuguese Superliga title credentials.

Forward Paulinho is part of the Portugal squad and could be lively in this clash, with Braga having actually dominated possession in the reverse fixture and they will be up against a team who have already banked enough Europa League points to go through.

The Leicester City manager will be mindful of the fact that his team have a hectic schedule of games on the horizon, with the likes of Jamie Vardy potentially not travelling for this game and the English side’s priority is definitely to secure a top four spot in the EPL this term.

Our betting tip is to back Braga with half a goal start at generous odds considering that a draw would suit both teams for this clash and the home side can definite benefit from playing in familiar surroundings.

We could see this being a close game and Rodgers will want to assess his players after a tough workout at Anfield on Sunday which has a much bigger bearing on the season than a dead rubber in Portugal.

When is Braga vs Leicester being played?

Braga vs Leicester will be played at 17:55 GMT on Thursday 26 November 2020 at Estádio Municipal de Braga.

What is Braga’s most recent form?

What is the predicted Braga line-up?