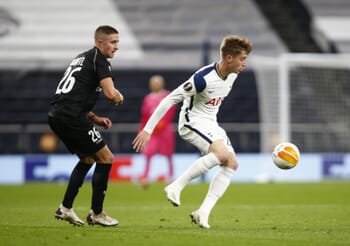 Tottenham are in a strong position to reach the last 32 stage of the Europa League although it’s clear that this competition is nowhere near as big a priority for the north London team as the Premier League.

Jose Mourinho has regularly fielded weakened teams and he certainly won’t be risking several first-team players for this midweek trip to Austria, with the likes of Son Heung-Min, Harry Kane and Tanguy Ndombele unlikely to be involved for the match at the Linzer Stadion.

Spurs Look Too Short in Betting For Europa League Clash

Our prediction is that this match will be closer than the current odds suggest. While Tottenham beat LASK 3-0 in the reverse fixture, they have subsequently taken a stumble when losing 1-0 in Antwerp and it’s plausible that the same thing could happen here.

Spurs are too short in the betting to win a game where three points isn’t essential and a draw would keep their opponents at arm’s length ahead of a final group game against Antwerp.

LASK Should Put Up a Fight Against Tottenham

The Austrian side lost at home to Antwerp last week although they were well in the match before being reduced to ten men and they’re enjoying a strong season domestically, with Linz having twenty points from nine games played.

Their home form has been particularly stunning with five straight victories having been enjoyed and our betting tip is to bet on them with a +1 goal start in this game, meaning that we get money back if they lose the match by a single goal.

A draw would suit the visitors and they won’t be busting a gut to try and win the game, with some quality players on the bench available should the Starting 11 struggle to despatch their opponents.

When is LASK vs Tottenham being played?

LASK vs Tottenham will be played at 17:55 GMT on Thursday 3 December 2020 at Linzer Stadion.

What is LASK’s most recent form?

What is the predicted LASK line-up?