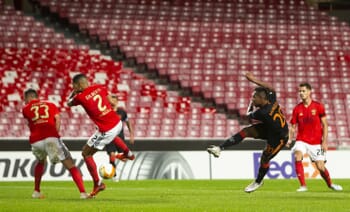 Rangers and Benfica played out an exciting 3-3 draw at the Estadio da Luz before the international break, with the Scottish Premiership leaders having gotten themselves into a strong position before the Portuguese side stormed back to land a point.

The two teams will clash at Ibrox Stadium on Thursday night, with the sides having some breathing space and having seven points on the board, with the result of this clash unlikely to have a strong bearing on them qualifying for the last 32 stage of the competition.

Should Rangers Be Betting Favourites to Win?

The Gers are even money to claim a victory in this clash and they’re having an excellent season, with Steven Gerrard’s team having amassed 38 points from 14 games played at the time of writing and they have scored 37 goals in those matches.

While Alfredo Morelos is an exciting talent, it’s full-back James Tavernier who is leading the scoring for the Gers, although let’s realise that the Scottish Premiership is not at the same standard as the Portuguese Superliga.

Bet on Benfica To Score at Ibrox

Benfica played most of the reverse fixture against Rangers with just ten men and they then scored twice when losing at home to Braga, with Jorge Jesus’ side boasting the dangerous Haris Seferovic and the Swiss international can probe away against opponents who could be weakened.

Luca Waldschmidt is another exciting talent who has forced his way into the Germany national set-up and we think that while the defence can’t be trusted in this clash, there’s plenty to be said about Benfica going forward.

Therefore, our betting prediction is to go for fairly short odds about the both teams to score yes option, with Rangers probably the most likely winners although we could see plenty of goals being bagged again.