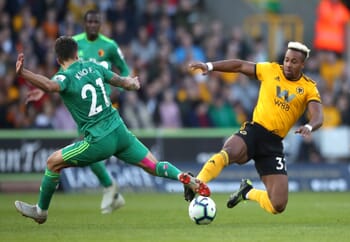 Wolverhampton Wanderers are determined to enjoy this season’s European adventure and a win on Thursday will move them closer to a place in the knockout stage of the competition.

Wolves started the group stage in inauspicious fashion when losing at home to Braga, although successive away victories against Besiktas and Bratislava means that Nuno’s team are in the box seat to qualify.

Wanderers are looking like an accomplished Premier League side already and, while they’ve drawn the majority of top flight matches played this season, there has been plenty to like about their defensive solidity.

Wolves come into this clash off the back of a 1-1 draw at Arsenal on Saturday, with the Midlands side having previously also come back from a goal down at Newcastle.

Previously to this, their win in Slovakia saw the English side rally from going a goal down, although we’re confident that their defence won’t be breached on home soil and Wolves will know how to execute a bloodless victory.

Conor Coady, Roman Saiss and Leandro Dendoncker could once again be the chosen trip in central defence, while the rest of the team largely picks itself and a lot of the attacking play is now through Adama Traore who is benefitting from more game time in an advanced position.

Raul Jimenez is a firm favourite with Wanderers supporters and the Mexican has quietly gone about his business to score eleven goals this season, with his equaliser at the Emirates Stadium illustrating his predatory instincts.

As for the visitors, they began with a 4-2 win over Besiktas and then drew 2-2 at Braga, although they found it harder to create chances against Wolves and could well be shut out throughout the ninety minutes here.

When is Wolverhampton vs Slovan Bratislava being played?

Wolverhampton vs Slovan Bratislava will be played at 20:00 GMT on Thursday 7 November 2019 at Molineux Stadium.

What is Slovan Bratislava’s most recent form?

What is the predicted Slovan Bratislava line-up?