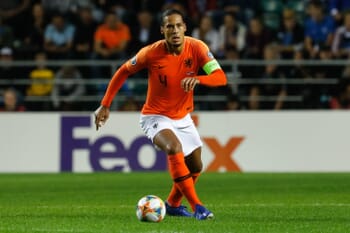 The Netherlands national team have been rocked after Ronald Koeman couldn’t resist the lure of managing Barcelona, although there’s nothing new about a caretaker manager stepping up to the fore and we can assume that Dwight Lodeweges will continue the good work with a talented squad of players.

Holland were runners-up in the first ever Nations League campaign after narrowly losing to Portugal, with the squad full of talented players and that includes captain Virgil van Dijk and his Liverpool team-mate Gini Wijnaldum.

In addition, Frenkie de Jong, Donny van de Beek and Steven Bergwijn are young players that can continue to make a major impact in an orange shirt and our tip is that the Netherlands will beat a Poland team who can’t quite boast the same calibre of players in their squad.

The big problem for the Polish team is that they will be missing their captain and talisman Robert Lewandowski, with the Bayern Munich striker fresh from having helped his club win the Champions League after a victory over Paris Saint-Germain.

While the Poles aren’t a one-man team, Jerzy Brzęczek’s side are weaker without a front man who has scored 61 goals for his country and Arkadiusz Milik will be now leading the line and hoping to stretch the Netherlands.

Poland were in good form towards the end of 2019 although their opposition was fairly modest and they were beaten 2-0 by Slovenia on 6 September 2019, with our prediction being that they will struggle to live with a vibrant team who are playing at the Johan Cruyff Stadium.

We are going to keep things simple and tip the Dutch side to enjoy some kind of victory although the presence of Van Dijk at the back means that some punters will be betting on the home side to win the game without conceding.