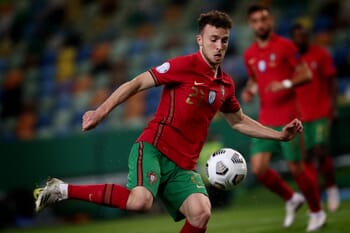 Portugal won the 2016 European Championship and they must surely have a chance of defending their title at the revised Euro 2020 tournament that is scheduled to take place next summer.

Fernando Santos has been in charge since 2014 and he has regularly seen his team carried by Cristiano Ronaldo in recent years, although there are now a crop of quality players which means that the Juventus star could be absent and the Portuguese would still look strong.

Why We’re Betting on Portugal to Beat France

Portugal boast several in-form Premier League stars including Bruno Fernandes and Diogo Jota, with the former shining bright for Manchester United since arriving at Old Trafford, while Jota has really excelled since signing for Liverpool and he scored a recent brace against Sweden in October.

There is also Atletico Madrid’s Joao Felix and the Manchester City pair of Joao Cancelo and Ruben Dias, with Portugal suddenly looking capable of challenging hard at Euro 2020 and our prediction is that they’ll be among the main contenders.

Can France Triumph at the Estadio da Luz?

France are neck and neck with Portugal in their Nations League group after three victories and one draw, with the two teams inseparable when meeting each other at the Stade de France on 11 October.

We are tipping against the French considering that they have to travel for this game and they will meet an in-form Portuguese side, with Didier Deschamps’ side only just scraping past Croatia and Sweden in their previous away games.

Ultimately this is a Nations League decider although Portugal are the reigning champions when it comes to this competition and they have a manager who is now blessed with leading players which could help them have the edge here.