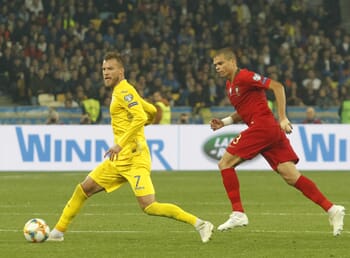 The bookies make Germany massive favourites to win this Nations League clash at the NSC Olimpiyskiy Stadium in Kyiv, with many punters likely to betting on Die Mannschaft when it comes to the clash on 10 October.

Germany are a household name when it comes to international football and they have a squad packed with players who could yet win Euro 2020, although it’s worth noting that Joachim Low’s side failed to land a victory in either Nations League game played in September.

There was a 1-1 draw in Stuttgart against Spain which saw the visitors score a last-gasp equaliser before another 1-1 scoreline against a Switzerland team who cancelled out Ilkay Gundogan’s early goal and we’re not going to tip the visitors at such short odds for this one.

Reasons for our Ukraine vs Germany Betting Tips

Low will be under instruction to use players sparingly considering that the domestic campaigns have only just begun in England, Spain, Germany and Italy, with a number of Bayern Munich players included after missing out last month.

However, there are likely to be several changes made to the team throughout the ninety minutes and our prediction is that Ukraine will outplay their odds and make amends for their hiding at the hands of Spain in September.

It should be noted that Andriy Shevchenko’s team were able to beat Switzerland 2-1 in their Nations League 2020/21 opener and they also qualified for Euro 2020 by finishing ahead of Portugal in qualifying.

Why Are Ukraine Betting Outsiders to Beat Germany?

One of the reasons why Ukraine are trading as betting outsiders is due to the fact that they were beaten 4-0 at the Alfredo Di Stefano by the Spanish, although they conceded an early penalty and were unable to recover against rampant opponents who took a decisive first-half lead.

We think Ukraine are a better bet on home soil and they can be backed on the Asian Handicap betting market with a goal start meaning that they would have to lose by two goals in order for us to lose the bet.