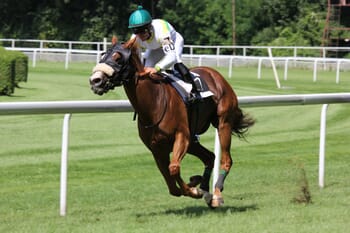 While the 2000 Guineas could be all about one horse, the 1000 Guineas betting market has a wide open look about it and there is plenty of value to be had from having an each-way bet.

Quadrilateral is trading as the current favourite and the Roger Charlton fillie had an impressive time of things as a two-year-old, although her official rating isn’t a lot better than the other horses in the race.

Last year, she claimed consecutive wins at Newbury before winning the bet365 Fillies’ Mile at Newmarket over a mile, with jockey Jason Watson getting her a neck ahead of the fast-finishing Powerful Breeze.

However, Jessica Harrington has a couple of decent prospects in the race and we’re liking the look of Millisle who achieved three firsts and two seconds as a two-year-old, with more to come from this horse.

As per the favourite, Millisle has a Group 1 success at Newmarket under her belt after obliging at 17.00 (16/1) in the Juddmonte Cheveley Park Stakes, with Shane Foley riding her to success after previously winning a Listed race at The Curragh.

In between those two successes came a second placed finish in a Group 3 race at Salisbury, although Harrington will feel confident about her prospects, with stablemate Albigna also having strong claims and she was last seen at the Breeders’ Cup.

A fourth placed finish in the Juvenile Fillies Turf shows that the horse needs to be respected, with Albigna having previously won the Qatar Prix Marcel Boussac - Criterium des Pouliches at Longchamp and that success came on very soft ground.