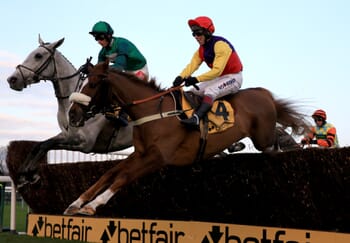 We’ve got a tasty renewal of the Queen Mother Champion Chase, with Altior bidding to win a consecutive hat-trick of victories and make history, with the Nicky Henderson horse having broken on to the scene when winning the Supreme Novices’ Hurdle in 2016.

The ten-year-old then claimed an Arkle victory in 2017 before consecutive wins in the Queen Mother, with Altior currently at the head of the betting market although it’s not been an ideal season for the reigning champion.

We’ve seen the charge run just twice this season, with the horse having a wind operation before finishing second behind the talented Cyrname at Ascot in November, with Altior landing the spoils at 1/3 at Newbury a month ago.

Altior has had a magnificent career and will go down as a Cheltenham Festival legend, although there are a couple of younger pretenders and DEFI DU SEUIL is one of them. Philip Hobbs has a hot property on his hands and the seven-year-old has landed a hat-trick of wins this season.

We’re talking about a horse that clearly acts at the Cheltenham track considering that he won the JLT Novices’ Chase last season, while the runner was able to get up ahead of Un De Sceaux over two miles on heavy ground in a more recent clash at Ascot.

It’s arguable that Defi Du Seuil should be trading as favourite, with the horse open to further improvement, although there’s another dangerous horse in the form of Chacun Pour Soi who actually beat Defi towards the end of last season.

The Willie Mullins-trained charge scored a win at Punchestown and has subsequently finished second at Leopardstown before winning in early February at the same course.

The latter success was in the Grade 1 Ladbrokes Dublin Chase, with Chacun Pour Soi claiming a fairly comprehensive victory over Min in what was effectively a two-horse race.

Min is actually entered for this race but looks set to be re-routed to the Ryanair Chase and the same applies to A Plus Tard, with Bun Doran and Politologue the horses that can pick up the scraps if one of the front three blows up.