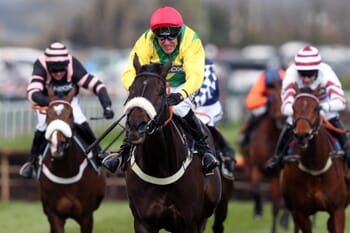 There might not be any horse racing meetings in England, Wales or Scotland right now, although there is plenty of Irish racing taking place and all eyes will be on The Curragh on Sunday when we enjoy the latest renewal of the Irish Lincolnshire.

This looks to be a wide open encounter between a group of four-year-olds who all largely broke on to the scene last year and it’s the Joseph O’Brien-trained Patrick Sarsfield who is the market leader.

It’s easy to see why the horse is favourite considering that the handicapper has generously only given a weight of 8-7 compared to the top weight Lancaster House which has to try and win off a mark of 10-1 instead.

Even so, Patrick Sarsfield wasn’t particularly impressive last season and was beaten as a 1/2 favourite in Cork before landing the spoils as a 1/5 favourite at The Curragh.

Instead we’re happier to look at a horse at a bigger price and that comes in the form of Quizical who runs for Sheila Lavery and the trainer thinks that the horse can outrun odds of 16/1 in this intriguing affair.

Quizical is among the top weights for this race and is actually a five-year-old with a good deal more experience than the rest of his counterparts, with the horse having spent the majority of 2019 without a victory before landing the spoils on 19 October.

Over one mile on soft-to-heavy ground, the horse landed victory at odds of 10/3 and the horse will be fondly remembered for winning the Pat Smullen Champions Race For Cancer Trials Ireland at the Curragh on Irish Champions Weekend last September.

Lavery said: “He’s an ideal candidate for the Irish Lincolnshire. I think he goes on any ground from yielding to soft as long as it’s not tacky – I don’t think he likes that at all.

“I think given the way the ground is, the feeling is he should be really competitive.

“I’d love to have given him a racecourse gallop, but that’s not going to happen, but we’re lucky to be racing so I’m not going to whinge.”