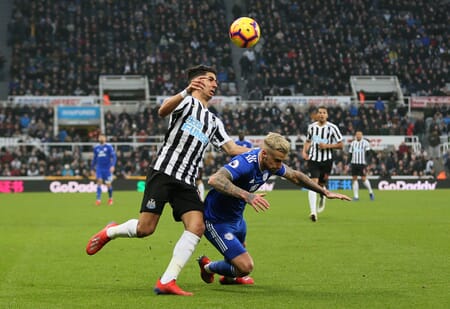 Newcastle United are without a win this season although the Magpies have been scoring plenty of goals and we think this trend will continue when they host Spurs. Steve Bruce needs to get points on the board if he’s to remain in charge at St James’ Park, so we should expect an attack-minded approach in this clash.

Despite drawing two and losing one home clash, the Tyneside outfit have scored five times, while Tottenham are fresh from a 2-1 victory over Aston Villa. That result steadied the ship after three consecutive defeats although Nuno Espirito Santo’s team have scored in five of their seven Premier League matches, so that leads us to have the betting tip of BTTS Yes on the Both Teams to Score betting market.

There were eight shots on target during their recent victory over the Villans.

Tottenham are warm betting favourites to win this clash and they are trading at around the even money mark, implying that they have a 50% chance of triumphing. A winless Newcastle team are the outsiders to earn their first maximum haul of the campaign, while the Over 2.5 Goals quote is odds-on with the bookies when it comes to the Total Goals market.

The BTTS Yes selection is even shorter, with the layers not confident that either team will be able to keep a clean sheet during the ninety minutes

After a big win over NS Mura in the Europa Conference League followed by a deserved victory over Aston Villa, there is a temptation to side with Spurs to win this clash. However, they have suffered away defeats at Crystal Palace and Arsenal, while the north London side haven’t kept a clean sheet in their past seven matches.

Our prediction is also down to the fact that Newcastle will play on the front foot and they have found their net in the past five matches. Allan Saint-Maximin is always capable of fireworks in attack, with Joelinton and Miguel Almiron flanking the Frenchman although there’s the distinct possibility that they will be outscored.

Harry Kane recently scored a hat-trick in Europe and he might relish the chance to get among the goals here, with the striker having previously worked with Son Heung-Min to great effect.