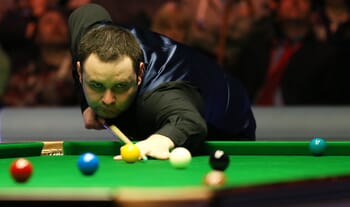 The 2020 World Snooker Championship was originally going to take place between 18 April – 4 May, although the COVID-19 pandemic means that we’ve had to patiently wait for the tournament to be rescheduled. However, we’ve now got a line-up and the action will start on 31 July, running through to 16 August.

This isn’t a particular traditional time for a professional snooker tournament considering it’s the height of the British summer. We’ve got the distinct possibility of players entering The Crucible in hot temperatures and duking it out on the Sheffield baize where a limited audience will actually be in attendance.

Judd Trump is the defending world champion after breaking his duck and we’ve had many qualifying matches to ensure we now have 32 players who will be lining up for a shot at landing the biggest prize in the sport of snooker.

We’re going to make a really bold betting prediction: Stephen Maguire can finally become world champion which would mean a first-time winner for the second year running. The Scot has had numerous bites of the cherry at The Crucible Theatre and never reached the final, although he has enjoyed a quarter final appearance in two of the previous three renewals.

The reason for our betting tip is that Maguire seems to be playing the most consistent snooker of his career to date. At the age of 39, he seems to be showing a good deal of maturity and demonstrated that he was in good nick after lockdown by winning the Tour Championship.

Not only did Maguire beat Mark Allen in the final but he comfortably defeated Judd Trump in the semi-finals and we think that odds of 28/1 about Maguire are really generous, with the Scot potentially meeting the current world champion at the second round stage.

Maguire was having a good season before the pandemic and reached the semi-final stage of the Players Championship before a narrow defeat against Trump, while he also reached the final of the UK Championship in late 2019 before losing to Ding Junhui.

Punt on Ding to Win in Sheffield

Many betting customers will be wary of backing Ding Junhui to win the world championship considering that the Chinese player has become the perennial bridesmaid at the Crucible, although look at what happened to Judd Trump twelve months ago and also consider that Ding is a class act whose A game is among the best in the world.

That 2019 UK Championship victory truly announced Ding was back in form and the 33-year-old could have a big run in Sheffield, with Mark King lying in wait in the first round before a potential second round clash against Ronnie O’Sullivan. This won’t be a match that would faze Ding considering that the pair have met so many times during their respective careers.

While Ding was beaten at the second round stage of the 2019 World Snooker Championship, he had previously reached the last eight in the past four renewals of the competition and this is now a venue where he enjoys playing his snooker rather than those initially difficult early years which saw a series of early exits.

Let’s take Maguire and Ding to give us a run for our money in the World Snooker Championship. If they can overcome the respective challenge of Judd Trump and Ronnie O’Sullivan in the potential second round clashes, we might just see them meet up in the final.