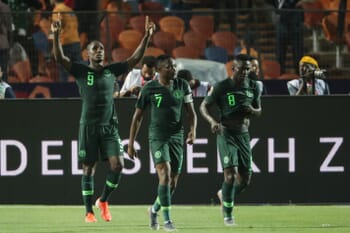 The penultimate match of the 2019 Africa Cup of Nations tournament takes place on Wednesday 17 July, with Tunisia and Nigeria meeting at the Al Salam Stadium in Cairo.

Both teams were beaten in AFCON semi-finals on Sunday and will now contest the tournament’s third place play-off, with Nigeria slight favourites to claim the bronze medals and we think that the Super Eagles are worth a bet at the current odds.

Gernot Rohr’s teams have been bright and attacking throughout the competition, especially during the knockout stage where the Nigerians have been full of goals.

They came back after trailing 2-1 to the Cameroon at half-time to overcome the Indomitable Lions at the last sixteen stage before winning 2-1 against South Africa who had previously beaten Egypt.

Nigeria then came back from a goal down against Algeria in the semi-finals only to be undone by a Riyad Mahrez free-kick at the death, although they’ll dust themselves down and feel confident of beating Tunisia.

Odion Ighalo has had a fantastic tournament and currently has four goals to his name to make the former Watford striker the leading scorer at AFCON 2019. He will hope to get on the scoresheet at least one more time and now claim the award.

Alex Iwobi, Samuel Chukwueze and Ahmed Musa also add attacking flair and we’re not sure that Tunisia carry the same goal threat, with the Eagles of Carthage having suffered defeat against Senegal in their semi-final.

The fact that they did so after playing 120 minutes of football will have been especially galling, with the Tunisians failing to win a match until the quarter final stage against Madagascar which they won 3-0.

Tunisia were outplayed for large parts of Sunday’s match against Senegal and we now think Nigeria are well-equipped to win this penultimate match of the tournament.